at this show for the first time in such a big environment we did uses the CITP COOLUX WYSIWYG streaming and it just worked great.

Hope you enjoy the video and the final warp we created at our studios in Marburg, big thanks to Wadim who stitched together the 8 projectors. 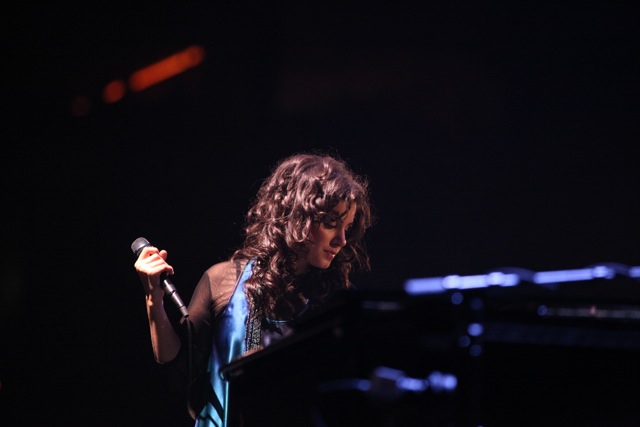 http://www.3d5.tv/
Ben-ri Electronica Spain is present in this great event with global repercussions, with the system Coolux. I will tell you more later ...

MSometimes projection surfaces are just not flat. And in some cases it`s much more then just some curves and edges. Like at the venue in Bad Kissingen where Deutsche Bank hold  a meeting. For the evening event Benjamin Lechler from PAVE came up with the idea of using a creative architectural video projection. The idea was a living roof that surrounds the audience and unobtrusively lighting up the venue and bring something organic beautiful within.…

A Widget Designer 3.0 is used to easliy control the 3 DVI-Matrixes (32x32, 16x16, 8x8) and change if it necessary to Backup Machines. Also the KVM Switch is controlled by the WD. What a great tool!!!!

Let's dance setup with 2 Pandoras Box Servers (+1 Backup). Playouts on Nova LED in the ceiling and Backdrop and a Mistrip construction formed like a palm tree used as show entry.

And most of them including PB Gear ! Wow what a year. Don`t won`t to bother you with everything single so here`s a rough update...

﻿﻿﻿The next Release Candidate of Widget Designer is now avilable:

I have recently uploaded the short and long version of the recorded 3D seminar from the coolux connect conference 2011 in cologne.

The video has been shot in 3D. Meaning the seminar room as well as the projection itself has been recorded in 3D so you can also see what we have seen in 3D in 3D...

Just use "anaglyph" glasses (red/blue) and set a high resolution within You Tube to have a good result.

I am pleased to annouce the Release Candidate of WD 3.0

Michael and myself will fly back tomorrow morning from an pretty outstanding experience travel through india.

We do highly like to express our deep thanks to "Steve" Montie Paul / The Video Company who invited us and gave us real cool time.

We enjoyed seeing india and we where lucky the client liked the result.

I just uploaded some pictures...

please be aware that we are not able to do any technical support in the Coolux Connect Network. If you have any technical questions to the support team please use the Coolux user forum or send a mail to support@coolux.de

Thanks for your understanding.

Back from Las Vegas ! To guarantee a high quality network exchange, each signup will be individually approved by Christie Pandoras Box.